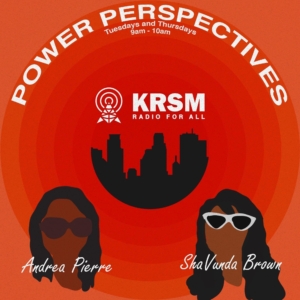 Tuesdays and Thursdays at 9am

ShaVunda Brown is an internationally award winning spoken word artist, an actress, organizer, and rap lyricist. She writes to empower and shed light on raw truths, with a sharp social consciousness. Using her knowledge of African diasporic spirituality, history, mythos and the southern folklore of her upbringing, she weaves stories and new visions of liberation.

Her voice has been heard on national campaigns for Sephora on racial bias, the adultification of black girls for Georgetown Law Center on Poverty and Inequality and a local campaign for Reproductive Justice for UnRestrict Minnesota. She has been seen in Art is Black Light a Mn. Original Series featured on PBS-TPT. She has originated a few roles in The World Premiere of stage plays produced by The History Theater (Mn), Children’s Theater(Mn) and The Arena Stage Theater (D.C.)