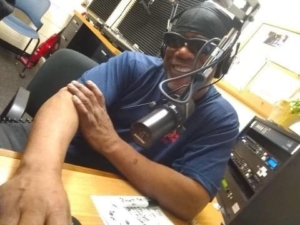 Monday through Thursday at 7 pm

My bio Gregory “Greg” Fields grew up the youngest of six siblings in Racine, Wisconsin. He learned at an early age how to navigate the mean streets of his hometown, eventually earning his GED at Gateway Technical College. After earning his GED, Greg enlisted in the US Army and became a member of the elite 82nd Airborne Division as a paratrooper artillery man and cook. As part of ongoing training, Greg parachuted across the country. When not active with the 82nd Airborne Division, he would listen to and visit local black-owned radio stations and concert venues, engrossing himself in the evolution of rap to hip-hop while learning DJing techniques. After being honorably discharged, Greg enrolled at Gateway Technical College and obtained his associates degree in marketing. While working on his Marketing degree, Greg participated yearly in the Distributive Education Clubs of America (DECA) which helped reinforce salesmanship, innovation, integrity, and teamwork. Unbeknownst to Greg at the time, these life experiences began to develop into the foundation of his current professional radio style, known now as “super cool, super smooth.” In March of 2017, Greg’s show TheGMusicShow was part of the inaugural radio broadcast at 98.9 KRSM; to which, his show still airs today every Tuesday from 5:00 to 7:00 PM. At present, Greg is enrolled at Blindness: Learning In New Dimensions (BLIND), Inc. where he is learning cane travel, braille, and technology for the visually impaired. He used his knowledge of blindness skills to teach blind radio enthusiasts how to operate radio mixing boards and become entrepreneurs in the radio industry. Currently, Greg teaches his four daughters and six grandchildren radio production, hoping to inspire future generations of radio enthusiasts.