Raised in South Minneapolis, Michel.Be was a long term participant of Pillsbury House + Theatre youth programs. After studying psychology, art therapy and Spanish at Pennsylvania State University, Michel returned to the Twin Cities to focus on making an impact in youth arts programming.

Michel.Be is also a professional DJ and producer, performing locally and internationally, focused on inclusive and revolutionary dance spaces for Black, Indigenous, People of Color, and LGBTQIA+ communities.

“ The KRSM Youth Media program has been an incredible opportunity for me to nurture youth voices and to grow alongside them in the areas of broadcast. We have a uniquely powerful platform at KRSM, allowing us to share authentic perspectives and strengthen our voices.” 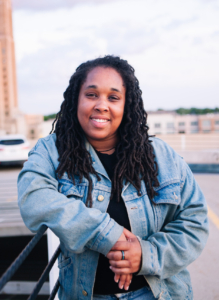 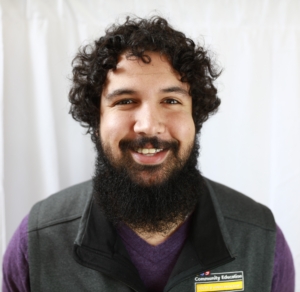 “ I did my undergrad in Winnipeg, Canada’s best kept secret. Currently, I am the Community Education Program Coordinator for Minneapolis Public Schools. I am passionate about discovering identity through experience. Community Education programs are a perfect opportunity for that, especially for young people. It’s really cool to host something that people look forward to. The only jobs I’ve ever returned to are those working with young people. I always feel in my element.

“ Working on the KRSM Online Radio Project was a cosmic alignment of my personal and professional interests which made the whole experience feel so rewarding.

In my spare time, I enjoy going to live shows, sewing, graphic designing and finding new side hustles.”

I was born in America. I am half Somail and half mixed. My culture is mixed with Somali and American. I live in the East Phillips neighborhood. I am a Freshman at STEP Academy. Some of my interests are basketball, video games, and anime. I also really like reading books. I am really good in my academics and I aspire to attend college to study engineering.

My name is Emmett. I am a Queer person from Minneapolis Minnesota. I spent most of my life living in both Minneapolis and a small town in Wright County. I go to Fair High School and I will be a Junior this year. I live in the Windom Park Neighborhood currently. I am very passionate about video games and art. I don’t really know what I want to do career wise after high school, but I know I want to do something that makes me happy.

My name is Mi’Kiyah. I attend Augsburg Fairview Academy where I will be a senior in the fall. I live In the Phillips neighborhood in South Minneapolis. I am very passionate about writing. I plan on going to college after high school.

I was born in the U.S. My ethnicity is Hmong. I like to write fiction stories and read fiction novels and I like watching crime or mystery TV shows. I wish to one day own my own house and be able to travel around the world, and be wealthy. I also hope to one day become a fiction writer or owner of my own bakery shop. I am attending Hamline University this fall to study English.

My name is Karisma and i’m 14 years old. My birthday is on September 2nd. I like to write and be on social media. I love shopping and hanging out with my favorite cousin. In my free time, I like to listen to music and watch TV. History and Band are my favorite subjects in school.

My name is Liam and I attend South High School. My favorite interests are skiing and hanging out with my friends. After high school, I hope to study Law and graduate from the University of Minnesota in Duluth.

My name is Max and I am a Sophomore at Southwest High School in Minneapolis. English and Gym class are my favorite subjects. I enjoy playing NBA 2K and watching cartoons. I am interested in basketball and music. I hope to become a sports analyst one day.

My name translated means night or daughter of the night and I think that suits me because I am most definitely not a morning person and am most productive at night. I am smart, kind, and love to talk. I’m always open to learning new things and I’m not afraid to speak up for myself and my thoughts. I like to doodle, sing, and read manga and graphic novels. I’m not nervous when it comes to speaking in large crowds of people.

Hi! The name is Clairrail and my podcast is called “local blk grl rants”. I promise if you get me a black gel pen I’ll blow your mind with my expressional art faces, they’ll be on the market soon don’t worry! I want to major in Psychology in Colorado. I talk about a range of topics on my podcast that I know you’ll find pretty interesting, so come over and press play! #dumptrump 🙂

I was born in the state of Minnesota, live in Northeast Minneapolis with my peeps, and I’m Ecuadorian too. I am interested in technology, gaming, music and art! I am really passionate about social justice and how we destroy all the violence within it to develop a better future FOR ALL!
Fun Fact: I love chicken, and if you don’t, that’s fine, I respect that.”

Zacharia is from Kenya and lives in Minneapolis. He is in his freshman year at South High School. He likes to listen to Hip-Hop and Afrobeat.

I was born in Minneapolis, MN and I live in the Webber-Camden neighborhood on the Northside. I am in my senior year at Venture Academy. I am a Christian. I love to explore and travel to different places. I am passionate about music and theater and I aspire to pursue my career as an entertainment DJ or an actress.

My name is Jaycion and I was born and raised in North Minneapolis. I am a Senior at Armstrong Highschool. I am a creative person, I love music and enjoy making money. I aspire to continue making music, rapping and making a name for myself locally and abroad.

My name is Max! I am a queer punk bolt of lightning, a resident of the Nokomis neighborhood, and a Junior at Washburn High School. I care a lot about people and the environment. Some of my favorite things to do are drawing, writing, painting, making music and hanging out with my buds. After high school, I aspire to make a difference through art.

I live in the Cedar Riverside neighborhood of South Minneapolis. I am a Sophomore at South High School. I love challenges and I’ll never back down from anything. I love basketball, working out and online shopping. I also love being outside when its nice out.

I attend Fair School Downtown in Minneapolis and I am in my SENIOR SEASON!!!!. I am originally from Milwaukee, have moved all over Minnesota and currently live in Columbia Heights. I aspire to attend college in Ohio and become a social worker. I want to change young people’s lives in schools the way my life was changed.

My name is Saber. I was born in Minnesota and my family is from Somalia. I am in my Sophomore year at Fridley High School. Basketball is my favorite sport and the L.A Lakers are my favorite NBA team (RIP Kobe). I like to listen to music, and my favorite rapper is Gunna. I want to become a home investor and buy my parents’ home.

My name is Hafso. I was born and raised in Minneapolis, Minnesota, I live in the Cedar Riverside neighborhood and I have 11 siblings. I am a Sophomore at Ubah Medical Academy. I have always wanted to work at a radio station. I’m really passionate about women’s rights, and racial equality. I aspire to study business in college and to be an entrepreneur.

I am African American and I am from Ohio. My interests are playing basketball, video games, social media and Rap music. I also like reading Diary of a Wimpy Kid series. I enjoy traveling to North Dakota, Ohio and Arizona where I have family. My favorite foods are chicken and pizza.