Effects of COVID on Prisons in the U.S. 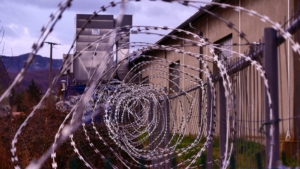 American prisons and jails are by far the most densely populated when compared to the rest of the world, making the pandemic an especially serious threat to inmates. With the lack of aid from federal and state prisons, more and more prisoners are dying due to COVID-19.

Prisons and jails are not meant for social distancing. Most prisoners live next to each other, with three feet of separation between their cots, and some have bunk beds leaving only two feet in between inmates. They are literally stacked like a honeycomb. Prisons only recently started handing out masks, but there aren’t enough cleaning supplies and wouldn’t meet basic health codes within the pandemic.

The primary route of transmission is through the staff. Unlike the prisoners, the prison staff have lives outside of the complexes, which means even if there are no COVID cases in a select prison, because of the lack of cleaning supplies, staff can easily transmit the virus to the prisoners.

This is especially dangerous in states that are opening up too early, places where staff can go out to public social gatherings, like bars and parties. Not only are staff infecting prisoners, but the infected prisoners are infecting un-infected staff and those staff are spreading the virus outside the prison, creating a loop of transmission for communities like St. Cloud, Minnesota.

Minnesota Department of Correction – St.Cloud facility has had problems with overpopulation during the pandemic. Minnesota Department of Corrections Commissioner Paul Schnell has directed each of the state’s prisons to implement a “stay with unit”. Through the “stay with unit”, they plan to facilitate inmates to participate in facility activities, including any programming, yard time, and dining, only with others in their living unit in order to slow the spread of COVID.

The U.S is finally starting to take action in order to help these prisoners, however, due to the slow federal response, it has cost the lives of over 28,000 people.

Adding to inhumanity is the disproportionate high percentage of minorities in both Federal and State Penitentiaries when compared to whites often for low-level drug crimes. According to a 2016 Star and Tribune article, 86% of Minnesotans are white, compared to 6% black. The landscape of prisons looks quite different, with six times the percentage of black prison inmates when compared to the overall population in Minnesota.

We are being forced to reckon with how society feels about prisoners and prison conditions.