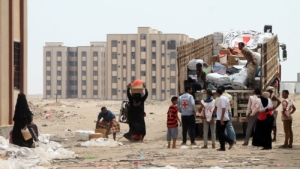 Written by Ris B.

The United Nations described the current situation in Yemen as the “ World’s Largest Humanitarian Crisis,”. Yemen is currently facing world hunger with nearly 13 million people facing starvation after a civil war broke out and killed 13,000.

It has also been described as a proxy war. The average civil war reduces the size of the overall economy by about 15%. Yemen has experienced the largest cholera outbreak ever recorded, and about 2 million children are malnourished.

The United Nations and other countries have previously provided food to about 13 million hungry people every month in Yemen. Since funding cuts, only 5 million people are getting rations.

In September, funding has decreased for the treatment of more than a quarter of a million children who are suffering from malnutrition. Yemen’s economy is in free fall with rising prices for goods. A major source of government income has collapsed. As a result, drinking water prices have increased, and in some cases, more than doubling within a few weeks.

Many people in Yemen are struggling to get food for their children, and more kids are dying by the hour. Many celebrities have donated to the Yemen foundation including George Clooney, Minnie Driver, Camila Cabello, Gael Garcia Bernal, Jay Ellis, Linkin Park and many more.

On top of these challenges, many Yemenis are losing their remaining income at an alarming rate. Without more funding, they all could expect large increases in hunger, malnutrition, cholera, COVID-19 and above all: death.

Hospitals are being bombed, and nurses and doctors are fleeing the country. It is crucial to not forget about Yemen, and to remain consistent in donating or signing petitions.