What We Know About the Beirut Explosion 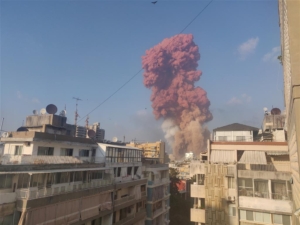 Written by Aliya B

*This article was written on August 8, 2020 and is reflective of the information available at that time

There was recently an explosion in Beirut, Lebanon. It left at least 135 people dead and about  4,000 people injured. These numbers may vary because the sources may be outdated and missing people may have been found since then.

Hospitals resorted to sending people to hospitals outside of Beirut because all the hospitals in the city were at capacity. The hospitals nearby were also nearing capacity. Some people were being treated in parking lots by teams of Red Cross workers. Fortunately, the Public Health Minister Hamad Hussein said that his ministry would cover the costs of treating the wounded.

A large collection of an explosive material was stored at the place of the explosion. Specifically ammonium nitrate, which is commonly used for fertilizer and bombs. It was stored in a Russian ship that was carrying about 2,750 metric tons since 2014. The blast was so large that residents reported noise and rattling windows related to the explosion about 140 miles away. Accidental detonation of ammonium nitrate has caused a number of accidents in the past, including the worst in United States history. In 1947, a ship carrying ammonium nitrate caught fire and exploded in the harbor of Texas City, Texas, starting a chain reaction of blasts that killed 581 people.

The Prime Minister Diab, announced that the people responsible for the explosions will be held accountable. As of right now, numerous port officials have been put on house arrest. The explosion damaged one of Lebanon’s most important international ports and severely damaged Beirut’s city center.

Even though the explosion was most likely caused by a fire and was not an attack, President Trump called it a terrible attack and a bomb of some kind on Tuesday.

The explosion came at a time of economic and social crisis in Lebanon as the country wrestles with the coronavirus pandemic and the prospect of financial ruin. The country’s economy was already struggling before the pandemic. The explosion also comes amid increasing tension between Israel and Hezbollah. The israeli military stated last week that it exchanged fire with the Hezbollah military on its border with Lebanon. Prime minister Benjamin Netanyahu has warned repeatedly that Hezbollah was involving Lebanon in their conflict with Israel. An Isreali government official stated that Israel had nothing to do with the explosion in Beirut.

Amongst all of this, cases of Covid-19 were still being confirmed. On Tuesday, 177 new cases were recorded.